Play Wonders Around The World Spot The Differences as a stand alone web app.

Wonders Around the World Spot the Differences

This an educational game which has children explore the wonders of the world by reading a brief introduction of each and finding 10 differences between two side-by-side pictures.

Play Wonders Around the World Spot the Differences Game Online

Children and parents can play this image comparison game by clicking in the window below.

Find 10 differences in side by side pictures of the 7 modern wonders of the world & the Pyramids of Giza.

The following descriptions have been republished from the in-game content.

Lying on Mexico’s sunny Yucatan peninsula, is the ancient Mayan city of Chichen Itza! Today the buildings are all brown in color, but from 600 to 1200 CE, when the city was thriving, the temples and homes were very colorful. Imagine what it looked like with stone buildings painted in red, green, blue and purple!

The Mayans loved their sports, and Chichen Itza includes a huge ball court which is nearly as large as our modern-day football field. Though we cannot know for sure what the Mayan sport looked like, historians have determined that players likely used a ball that weighed up to 9 pounds, and the goal was to keep the ball in play by hitting it with their hips. Ouch!

The main building in Chichen Itza is the Temple of Kukulcan, known as El Castillo (which means “the castle” in Spanish). Look carefully and you’ll notice that the pyramid of El Castillo has 365 steps, one to represent each day of the year. Ancient Mayans flocked to this temple to worship their god, Kukulcan, which they believed to be a snake with feathers.

Can you imagine playing a sport with a 9 pound ball? What sport do you like to play?

The Great Wall of China

If you wanted to walk the entire Great Wall of China, it would take you over 170 days… without stopping! It stretches for over 13,000 miles, which is like traveling back and forth from New York City to Los Angeles nearly 5 times.

The Great Wall is located at the border of northern China, and was built to protect the Chinese from enemy invasions. The wall includes over 25,000 watch towers, where sentries stood to warn the Chinese of invaders, and also to collect taxes from traders coming in and out of the country with their goods.

Historians have determined that construction of the wall was started as early as 700 years BCE, which makes the wall nearly 3000 years old! What was the secret of the Chinese builders? Sticky rice! Ancient builders discovered that adding a very popular local resource – rice – made the bricks bind together so tightly that not even weeds were able to grow between the stones.

Did you know that the Great Wall of China is the longest structure ever built by humans?

The statue of Christ the Redeemer was built in the 1920s, in Rio de Janeiro, Brazil. During that time the local Catholic population thought that many people had strayed from their religion, and they wanted to build a statue that reminded them of the Catholic faith. What resulted is a giant statue of Jesus Christ, a central figure of Christianity. The statue was designed to be a symbol of peace, represented by Jesus’ open arms.

The statue, including the pedestal, stands 126 feet tall. (That’s like 9 stories of a building!) But what’s even more impressive is that this super tall structure is located on top of a mountain. This way, the statue is always visible to the millions of residents of the city below it.

Unfortunately, the Christ the Redeemer statue has had some hard times: it was struck by lightning on several different occasions, and it has been attacked by vandals. But, the statue still stands proud today and has come to be known as a symbol of Rio de Janeiro, and of Christianity, recognized by people all around the world.

Did you know that the Christ the Redeemer statue is actually hollow?

Let’s travel to the center of Rome for one of the greatest amphitheaters ever built: the Colosseum! In 70 CE, the Roman Emperor Vespasian built the Colosseum as a gift to the people of his beloved city, to be used as an arena to host games and events for up to 60,000 people.

For hundreds of years, the Colosseum welcomed millions to its theater. Emperors put on shows such as gladiator battles, animal fighting and magic acts. The Romans were even able to flood the floor of the Colosseum with water from a local aqueduct, and bring in ships for actual naval battles! Gladiator fighting, however, was by far the most popular attraction. Gladiators, some of whom were women, were actually captured slaves or condemned criminals who were forced to fight for their lives in front of thousands of people.

Upon entering the Colosseum, ancient Romans were given a piece a piece of pottery or broken stone with their assigned seat number. Average working-class citizens sat at the very top of the arena, while the wealthiest members of Roman society sat close to the bottom… right next to the action.

Do you think you would like to be a citizen of ancient Rome?

In the deserts of northern Egypt lay one the oldest of the wonders of the world, constructed as early as 2000 BCE: the pyramids of Giza. The three pyramids were built as tombs for the ancient Egyptian Pharaohs, and stand over 10 stories high.

Egyptians believed that the death of a human being represented the passing from this life to the afterlife, and that the dead person needed to bring certain items with him or her. The pyramids, therefore, were built as giant homes to hold the souls of the deceased, and also included room for the dead person’s belongings and weapons.

There is great mystery around how the pyramids were built, since ancient Egyptians had to work in the hot desert with no electricity. They likely moved the giant stones and boulders by hand, and dragged them into place. Historians believe that it took over 100,000 workers nearly 20 years to build the pyramids.

If you were building a pyramid for yourself, what do you think you would want to put inside of it?

Machu Picchu is located at the very tip of a mountain in southern Peru, over 8000 feet above sea level. It is so high that visitors sometimes experience altitude sickness on their way up the mountain! Want to visit? Modern day visitors can get there by car or bus. But if you want to experience the journey like the Incas did, put on your hiking boots. The Inca Trail follows the footsteps of the original trail used by the Incas, and can take anywhere from three to five days!

During the 1450s, Machu Picchu was a bustling country estate for an Incan royal family, and housed over 750 servants and staff. What a vacation home! Bones discovered in this area indicate that the city was populated with lots of llamas, alpacas, and even guinea pigs. Many of the dead were buried with their dogs, which suggests that Incas liked their pets very much!

The city was eventually abandoned in the mid 1500s, likely because of an outbreak of illness among its inhabitants. Many of the houses and temples still remain, however, and visitors to Machu Picchu can get a glimpse of what it was like to live in Peru in the 1400s.

Would you be willing to hike the Inca trail to get to Machu Picchu?

Visiting the ancient city of Petra in southern Jordan is like taking a step back to ancient history: nomadic tribes settled there as far back as 9000 BCE! Petra was originally a thriving trade town, which housed thousands of tradesmen and laborers. For reasons we do not quite know, however, the city was abandoned in the 1500s CE and went undiscovered until the 1800s when it was discovered by a Swiss traveler. Petra was hidden for so many years that it is often called the “lost city”.

Arriving to the city of Petra is as fun as being there. The city is located among rugged cliffs and mountains, within a valley near the Dead Sea. To reach Petra, visitors walk nearly one mile down the narrow Siq gorge, which is a small passageway between two mountains. Some areas of the Siq are as narrow as 10 feet, and can be very dark.

At the mouth of the Siq passageway, visitors see their first glimpse of the ancient city: The Treasury Building. Though we now know that the building is an empty façade, it was believed by local tribes to contain great treasures, which is why it was called the “Treasury”.

Do you think you would hike through the narrow passageways of the Siq gorge?

Did you know that the Taj Mahal was built as a gift of love? In the 1600s, the Emperor Shah Jahan ruled India alongside his wife and trusted advisor, Mumtaz Mahal. Sadly, Mumtaz died while giving birth to her 14th child, leaving the Shah Jahan in despair. As a sign of his love and affection, Shah Jahan set out to build his wife the most beautiful mausoleum – or burial ground – that ever existed. What resulted is the Taj Mahal.

The Taj Mahal is certainly an impressive site to visit. Constructed in the city of Agra, in northern India, building the Taj Mahal took 20 years, over 1000 elephants to carry building materials, and over 22,000 laborers. If we were to build the Taj Mahal today, it would cost over $800 million dollars!

The mausoleum stands nearly 600 feet tall and includes a giant dome made entirely out of marble. Four smaller domes and 4 minarets (or watchtowers) surround the main building. Indian architects also constructed a giant reflecting pool leading up to the main structure. If you look closely you can see that the pool acts as a mirror, reflecting the image of the impressive dome.

The Taj Mahal represents the love story between Mumtaz Mahal and Shah Jahan. Can you think of any other historical love stories?

Like This Game? Review This Educational Find the Differences Video Game for Young Girls & Boys 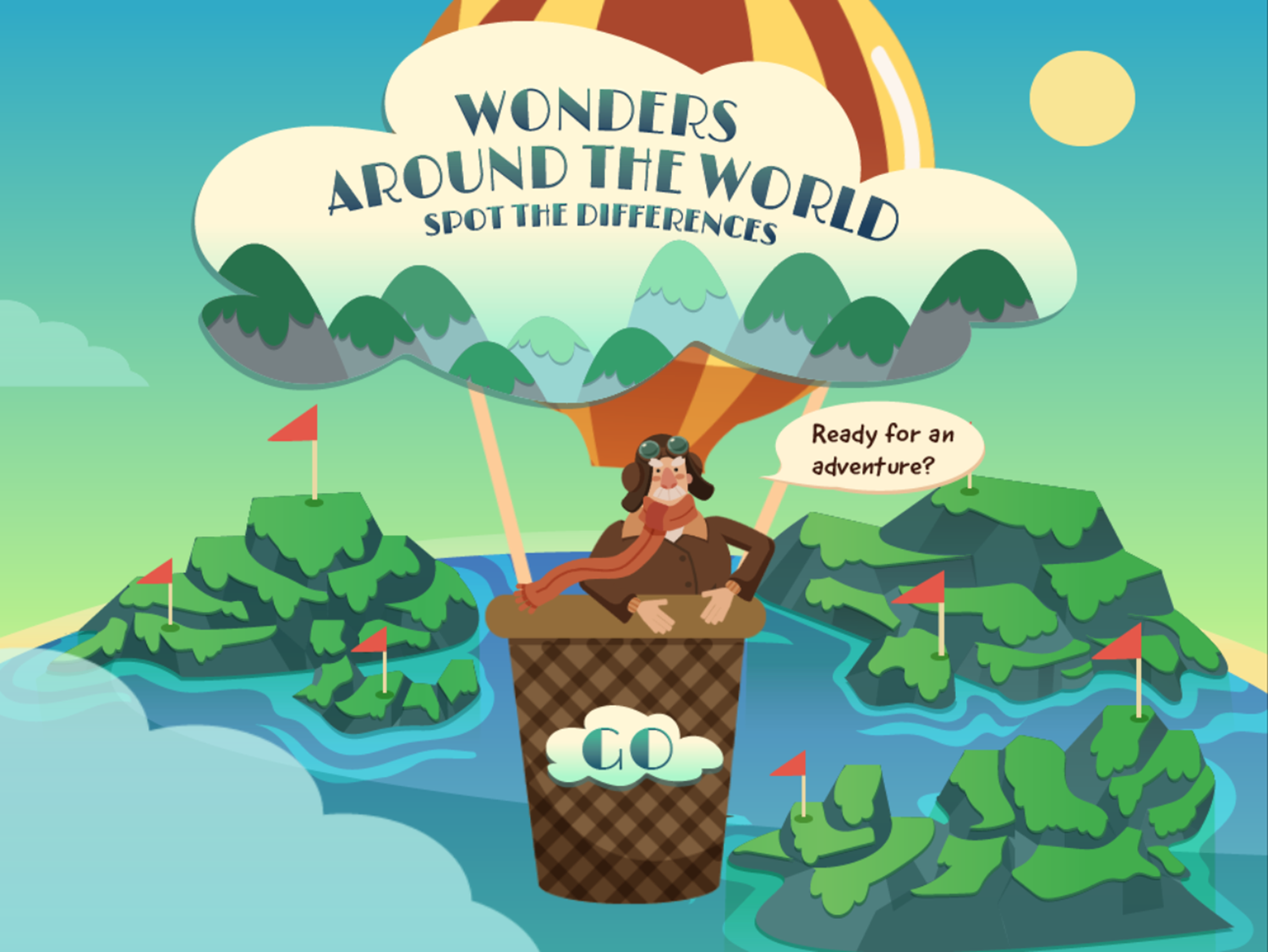 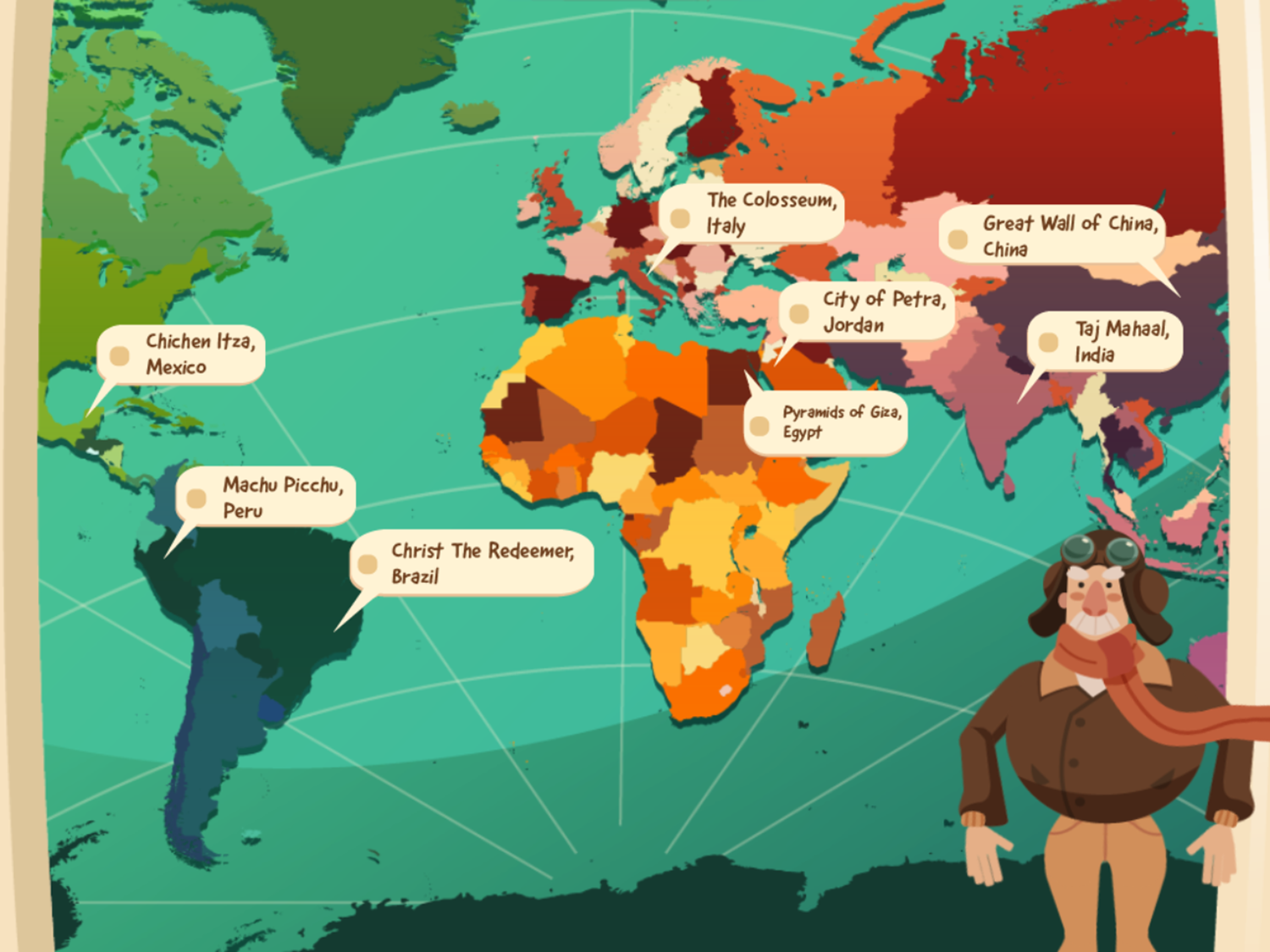 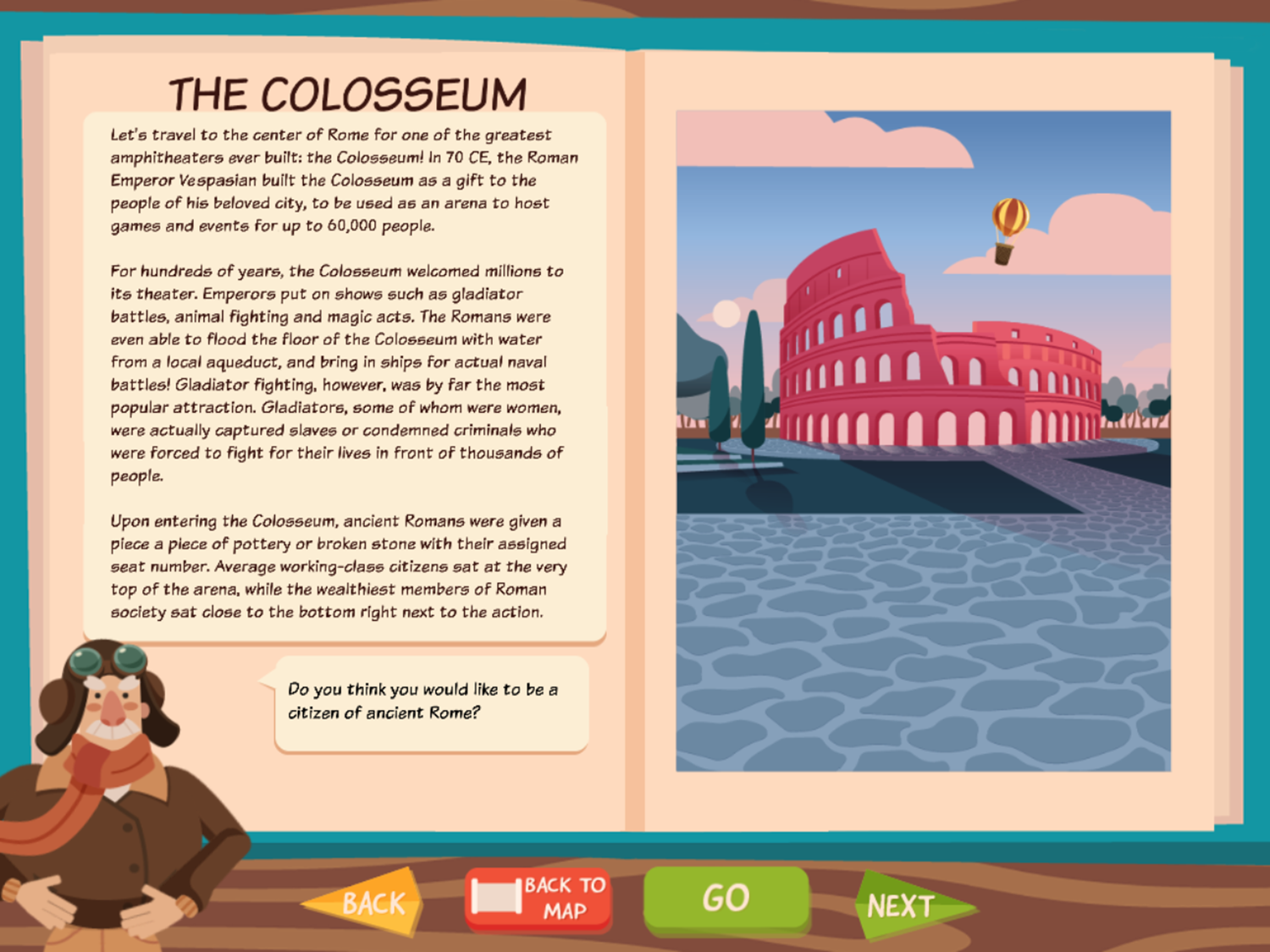 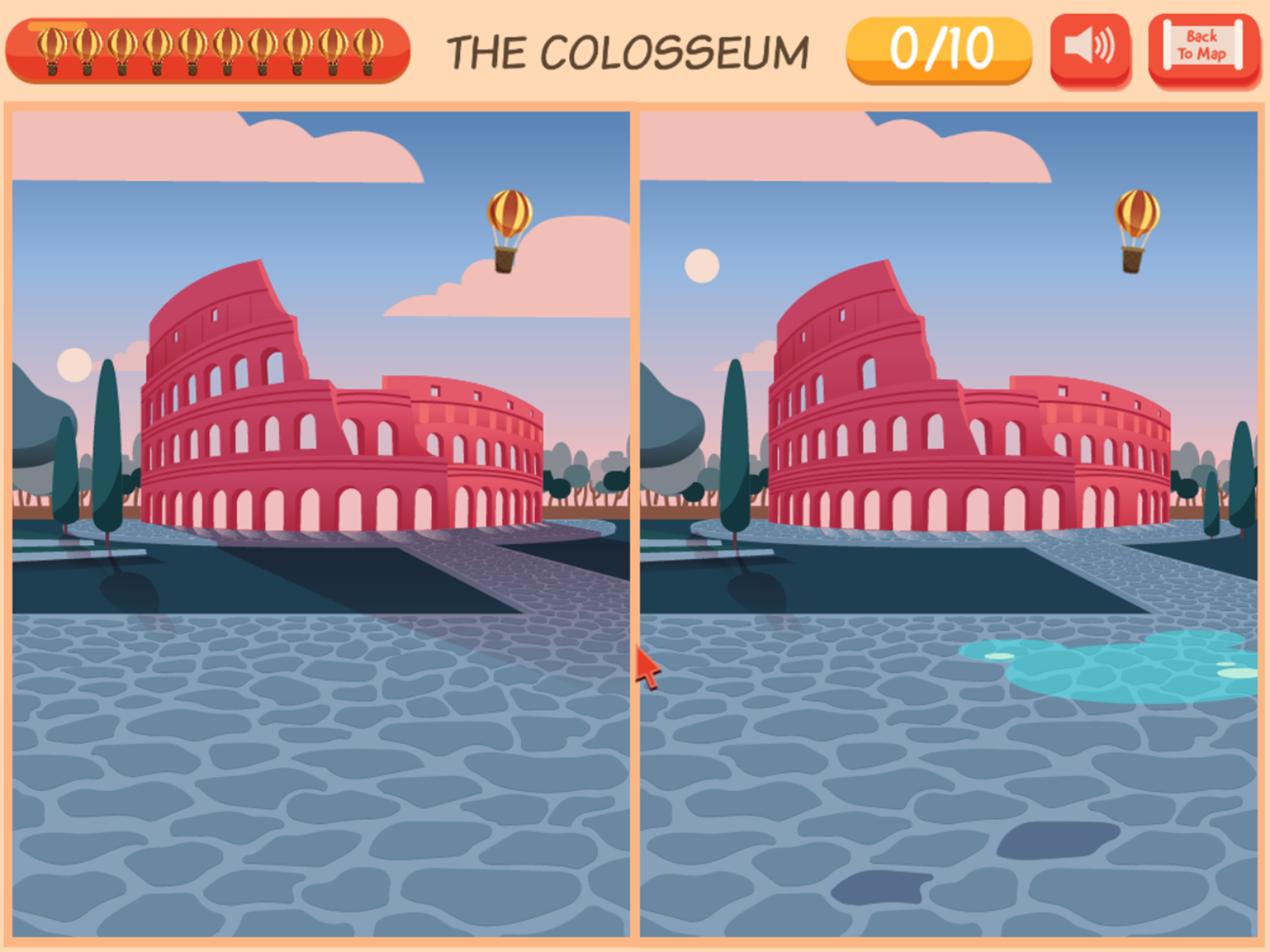 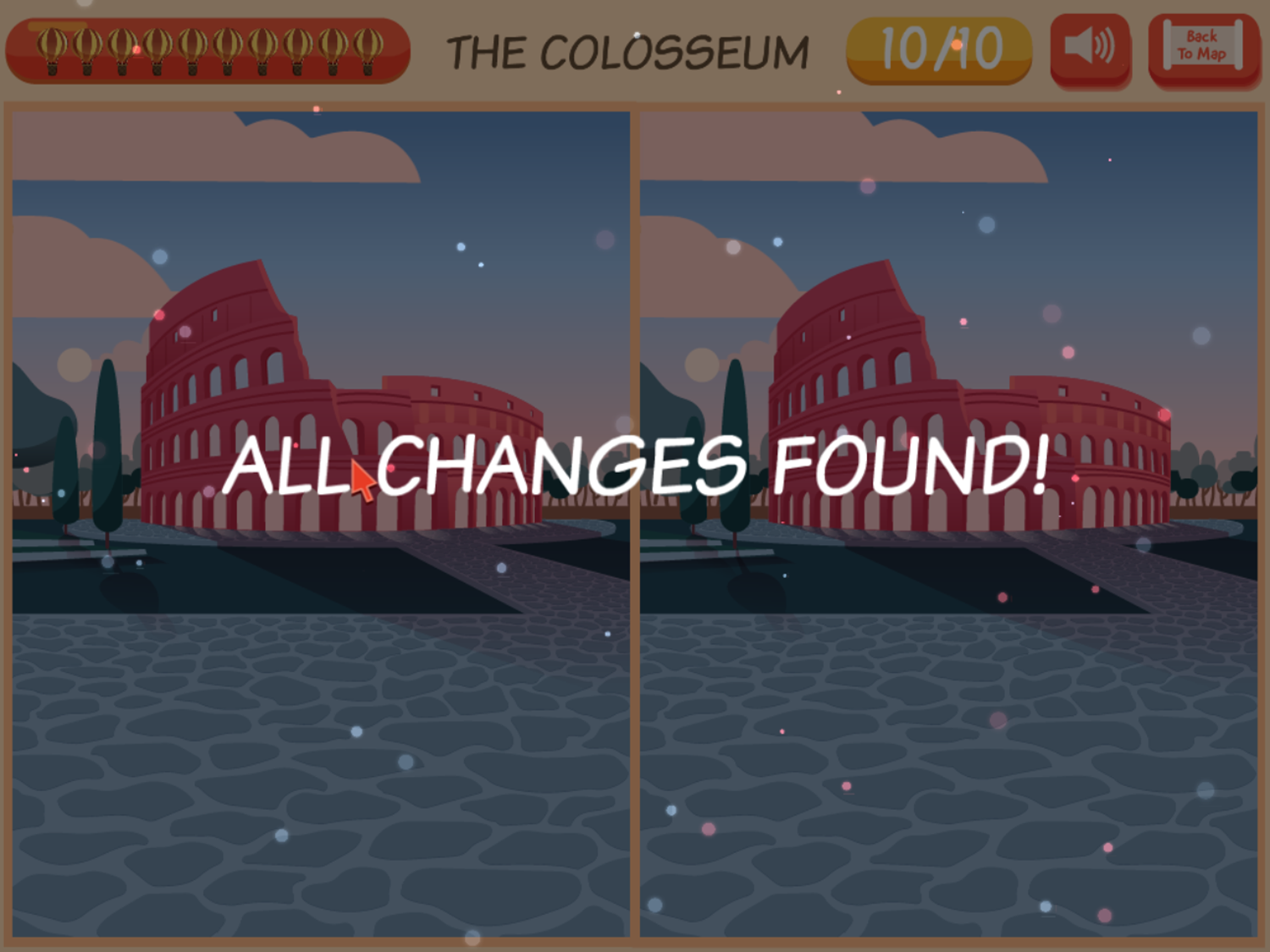 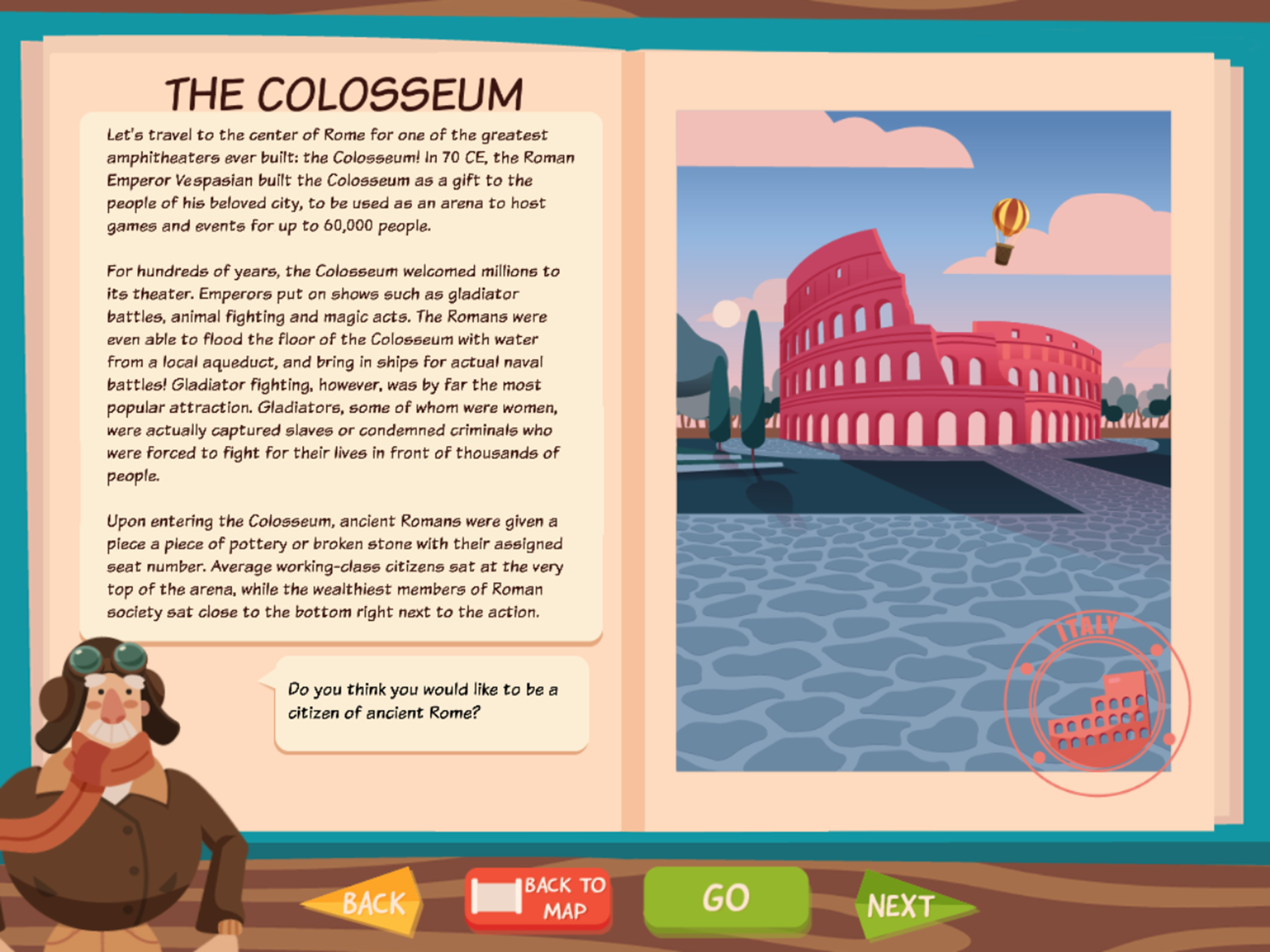 This game was published in these categories: Find Differences, Geography. You can visit any of them to select other fun games to play.